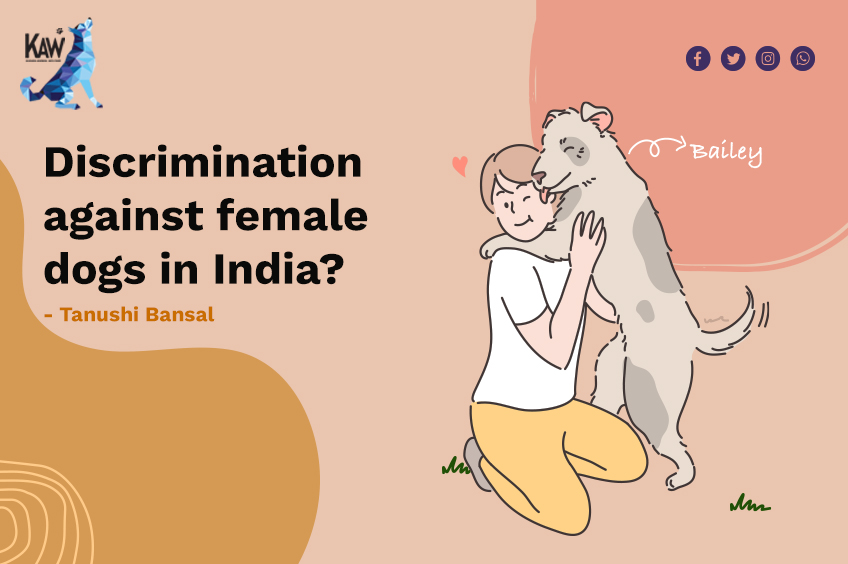 Discrimination against Female Dogs in India

DISCRIMINATION AGAINST FEMALE DOGS IN INDIA

Discrimination is a concept familiar to many, and amongst the human race, different groups experience it at varying levels. The idea of discrimination against different types of dogs by humans may sound absurd or ridiculous, but it is a sad reality. Dogs are discriminated against for many reasons - their breed, age, physical abilities, looks, and biological sex.

By definition, discrimination is the unjust or prejudicial treatment of different categories of people, especially on the grounds of race, gender, class, sexuality, age, or disability.

We do not need a dictionary to define it for us. For many people, it is a part of our everyday lives - for women in the form of gender prejudice, for religious minorities in the form of persecution, and for those of a “lower caste” in the form of caste-based violence.

However, we do not always realise the implications of discrimination across species, especially gender-based, and especially with our own companion animals.

Discrimination stems from perceived differences between two groups - in this case, between male and female dogs. While these differences do exist, we would like to break down the notions that lead to the current disturbing treatment of female dogs.

It is a harsh reality of the dog breeding industry that females are forced to breed over and over again to create puppies for sale. These puppies are separated far too early from their mothers, sold to ignorant or uncaring families, and may end up being abandoned.

The conditions in which rescue organisations find most female dogs are truly deplorable. Breeders often use female dogs for the sole purpose of breeding, not giving them enough time to heal between pregnancies and separating them from the litter soon after birth.

They are kept in tiny spaces with unhygienic conditions, provided with only the bare necessities and inadequate medical care.

The fate of these puppies and the fate of their mothers are similarly tragic. Female dogs are bred to the point of exhaustion and illness, with no time to recover, no medical assistance, and no one to care for their needs. They live in destitute conditions, and are considered worthwhile only as long as they are able to produce puppies who are fit to be sold. “Breeder reject” dogs are collateral damage for breeders and people who buy dogs- animal rescue groups see the condition of these dogs who have been bred repeatedly to the point of exhaustion, and are close to death when they are found abandoned by the breeder who no longer finds them financially useful.

Male dogs have long been preferred as pets. They are believed to be more protective, energetic, and playful, and they are considered much easier to handle. Additionally, and more importantly in the minds of people, they do not undergo menstruation and cannot get pregnant.

Female dogs go into heat twice a year. During heat, they have a vaginal discharge, try to mate, and may attempt to run away. There is an added risk of pregnancy and the burden of taking care of the subsequent litter, along with any complications that may occur due to the pregnancy itself.

On the flip side, male dogs that are unsterilized have a tendency to run away from home, fight aggressively with other male dogs to reach a female in heat, tend to exhibit mounting and humping behaviour, and can be unpredictable and dominating.

We refrain from talking about menstruation, more so when in reference to dogs. It is thus not commonly known that spaying a female dog takes care of the "little mess" that we are too afraid to talk about.

Spayed or neutered females do not go into heat, and neutered male and female dogs are essentially the same. Spaying also makes your dog healthier, reducing chances of infections and malignancies in both males and females. Our article on “The Importance of Spay & Neuter” talks about the many benefits of sterilization.

Why adopt a female?

Female dogs are more affectionate, calmer, and easier to train. They also mature faster than males, having a smoother adolescent period. Female puppies and dogs are adopted at a much lower rate than their male counterparts, and in India, the price of female dogs is also lower as the population at large considers them less desirable. All of this, simply due to some minor physiological differences which can be addressed by spaying.

When you adopt a female dog, not only will you get to experience the joy that comes with giving a new life to a girl that otherwise may be overlooked simply due to her biological sex, you get extra cuddles as well. Take home a female dog and you will bring home unconditional love!